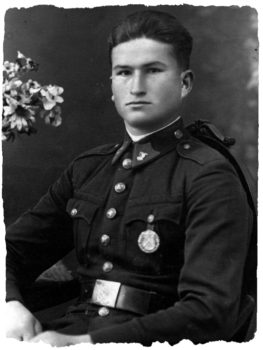 Ceske Brezovo, Slovakia… 1944 – From April 1942 until August 1944, Harry Dash and his parents, Rudolph and Margit, were prisoners in the Novaky labor camp in Slovakia. At the end of August 1944, during the Slovak uprising, the Dash family managed to escape from the labor camp. Unfortunately their freedom was short-lived as the Germans quickly crushed the uprising and began rounding up the Jews.

Harry and his parents found temporary shelter in the mountains. However, the local peasants were afraid to help Jews for fear of German reprisals. The Dash family was in desperate need of food and shelter. One day they met a very poor peasant family – Ondrej Sulaj, his wife, Maria, who was expecting their second child in weeks, and their young daughter. Ondrej and Maria offered to help Harry and his parents. There was no hesitation – Ondrej and Maria simply said yes, come to our home. Later that night, under the cover of darkness, Ondrej took the Dash family to his one-room home.

Until they were liberated, Harry and his parents lived with Ondrej and his family on their small farm. They all survived the war. Many years later, when Harry Dash asked Ondrej and Maria why they jeopardized their own lives and those of their two children in order to save complete strangers, their answer was simple “We saw that you had nowhere to go.”

Rudolf Dash died in 1949 as a result of injuries incurred during the war. Harry and his mother moved to Israel. As Harry wrote in his testimony to Yad Vashem, “Had it not been for Ondrej and Maria, I am positive we would not have survived.”