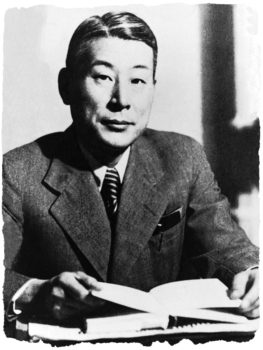 Kovno, Lithuania… August 1940 – In November 1939, Chiune Sugihara, a Japanese diplomat, opened a consulate in  Kovno, Lithuania. In June 1940, the Soviet Union invaded Lithuania and ordered all consulates to close by the end of August. On July 27, Sugihara saw hundreds of people waiting outside the consulate. He learned that they were Polish Jews trying to escape from the advancing German army.

Sugihara agreed to meet with a group of the refugees. The delegation asked him to issue Japanese transit visas to the Jews so that they could travel east across Soviet territory and exit through Japan on their way to other countries. Many of the refugees hoped to reach the Dutch West Indian island of Curaçao, which did not require visas for entry. Even though they had a final destination, they would not be given exit visas by the Soviet Union unless they also had visas permitting them to continue their trip. Sugihara was moved by their plea for help.

After the meeting, he wired the Foreign Ministry in Tokyo, explained the situation, and requested permission to issue the visas. His request was denied. The Ministry insisted that a Japanese visa be issued only if the refugee had a valid end visa and enough money to cover the cost of the entire trip. Sugihara knew that most of the refugees could not meet either requirement. Over the next few days, he sent further requests to the Foreign Ministry for permission to issue the visas. Each request was met with silence. Realizing the urgency of the situation, Sugihara began to issue Japanese transit visas.

Sugihara worked more than sixteen hours a day to issue 2,139 handwritten visas. He distributed them regardless of whether or not the refugees had the necessary supporting documents. In early September 1940, the Soviet authorities forced him to close the consulate in Kovno. As he and his family prepared to leave Kovno for Berlin, Sugihara continued to issue visas on the train platform. He handed out more once he was on board.

Upon his return to Japan, Sugihara was forced to resign from the Foreign Service. The official reason for his dismissal was the downsizing of the diplomatic corps, but the real reason was likely the disobedience he exhibited in helping the Jews of Kovno. None of the refugees ever made it to Curaçao. From Japan, most went to Shanghai, China, and others to the United States, Canada, and Palestine.

Since entire families were often included on a single visa, thousands of Jews survived due to the efforts of Chiune Sugihara, who passed away in 1986.