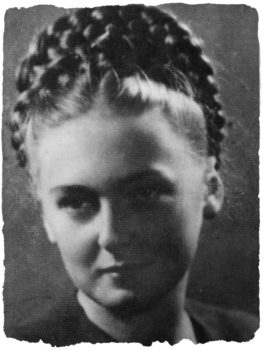 Warsaw, Poland… 1941 – During the German occupation of Warsaw, Janina Stupnicka managed and registered residential buildings, including those located in the Warsaw ghetto. Because of her job, Janina had a special pass, which gave her unrestricted entry to the ghetto. During her trips into the ghetto, Janina would bring her twelve-year-old daughter, Anna, to help smuggle in bread and other food items. As they were distributing food in the ghetto, they met Mr. Adler, who begged Anna and Janina to save his daughter, Liliana. Anna and Janina agreed to hide Liliana.

During the winter of 1941, Janina and Anna smuggled eleven-year-old Liliana Adler out of the ghetto by dressing Liliana in Anna’s Catholic school uniform, enabling Liliana to pass as Catholic.  Anna never forgot how Liliana’s father cried as he said his final goodbye to his only daughter who was dressed in a navy blue coat and a beret with the edelweiss symbol.

Janina obtained false identification papers for Liliana under Janina’s maiden name.  Anna, Janina, and Liliana lived in a constant state of fear. The neighbors kept asking questions about Liliana, but Anna and Janina always misled them.

During the summer, Janina would take Anna and Liliana to the country. Liliana lived as Anna’s cousin in their two-room apartment in Warsaw for four years until they were liberated by the Soviet army in 1945.

Because of the bravery and ingenuity of Anna and her mother, Liliana survived the Holocaust.  After the war, Liliana immigrated to France.

Janina and Anna gave shelter to other Jews and their small apartment became a meeting place for Jews in hiding. They hid Ryszard Grynberg for several months, until they were able to obtain forged documents stating Ryszard was Catholic. Janina found a job for Mikolaj Borenstein, a Jewish physician. Mikolaj came to their apartment every day to eat and rest. Both Ryszard and Mikolaj survived, thanks to Janina and Anna.

Janina passed away years ago. Anna is in her 90s and continues to live in Warsaw.