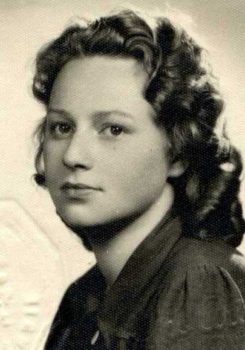 Warsaw, Poland …Winter 1942 – Henia Rozen, a twelve-year-old Jewish girl, lived in a small village outside of Warsaw with her family. When the war broke out, Wanda Olbryska, a neighbor, agreed to hide all nine members of the Rozen family. After being in hiding for a year, Mrs. Rozen was desperate to have her daughter, Henia, return to school. Mrs. Rozen spoke with Wanda about Henia’s schooling. Wanda approached her friend, Anna Strzelecka, and begged her to take Henia.

Anna lived with her three children, Barbara, Alina-Maria, and Krystyn, in Warsaw. In the winter of 1943, just before the liquidation of the Warsaw ghetto, Anna and her children began hiding Henia. Despite the penalty of hiding a Jew, if caught they would have been killed, Anna and her children agreed to give Henia shelter. The Strzelecka family was also involved with the Armia Krajowa (AK or Home Army), which was the main Polish resistance movement in occupied Poland.

As Alina-Maria, later Sister Kinga, wrote to Yad Vashem, “I insisted that we should help them.  We cannot pass up the chance to save a daughter of the people of Israel.” The Strzelecka family hid Henia for two years and treated her as if she was their younger sister. Henia’s last name was changed to Strawska, and she was able to pass as a Catholic. Henia went to church with Barbara and her family and attended school. While there were several close calls when the Germans would come looking for Jews, they never discovered Henia.

In late July 1944, Henia managed to leave Warsaw to bring food to her parents and grandmother who were still in hiding outside of Warsaw. Unfortunately, Henia was unable to return to the safety of the Strzelecka family since the Warsaw Uprising had started. Henia remained in hiding with her family. They all survived the war.  In 1948, Henia and her family left for Israel. Years later, Henia reconnected with the Strzelecka family.

Barbara Strzelecka, her mother, Alina-Maria, and Krystyn were recognized by Yad Vashem in 1983. Anna, Alina, and Krystyn died years ago.  Barbara is in her 80s and continues to live in Warsaw.