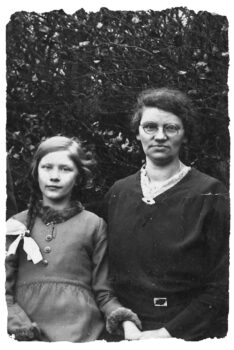 Driebergen, the Netherlands… January 1943 – Jan and Johanna Stroomenbergh and their two children, also named Jan and Johanna, were devout Protestants. Jan, Sr. was the caretaker of the local Calvinist Gereformeerde church, where the family was members.  With the outbreak of the war and the German persecution of the Jews in the Netherlands, the Stroomenbergh family was committed to saving “The People of the Book” and the entire family was involved with resistance activities.

In 1943, Arnold Bouwman, a five-year-old Jewish child, could no longer remain where he was hiding.  A member of the Dutch underground made arrangements to take Arnold from where he was being hidden to the Stroomenbergh home.  Arnold was passed off as the Stroomenbergh nephew, who had been evacuated from The Hague.  Only the immediate Stroomenbergh family and their minister knew Arnold’s real identity.

When the family was alerted to a pending search or Aktion, Johanna, Jr. would take Arnold on the back of her bicycle to friends until the danger passed.  The Stroomenbergh home was a center of resistance activity throughout the war. Johanna, Jr. was also a courier for the underground.  She would take Jews to hiding places and would deliver messages and ration coupons.

On January 23, 1945, Jan, Jr. dressed in a German military uniform, participated in a raid on a police station in Zeist, freeing about 12 Jewish prisoners.  Jan, Jr. took the freed prisoners to their church until he was to able find them permanent hiding place.  The Stroomenbergh family sheltered one of the prisoners, Ernest Stein, until liberation.  The family also hid Abraham Wijnschenk and his wife, Judith, for three months, in their home.

During the “hunger winter” of 1944-1945, the Stroomenbergh family managed to feed their family and all the Jews they were hiding in their home and those hiding in other places for whom they were providing food.

As Arnold wrote in his testimony to Yad Vashem, “All members of the Stroomenbergh family took part in keeping me out of German hands.  They took enormous risks on behalf of me and many other Jewish people.  Jan Stroomenbergh, Sr. and his wife took care of me and my education during the war. They treated me like their own son.  After the war, they understood immediately the importance, for a Jewish child to be raised by young Jewish relatives.  My parents were betrayed and died in Auschwitz…I stayed in the Stroomenbergh home…this meant that all of the members of the church were aware of my presence and also of the presence of Mr. and Mrs. Wijnschenk. Every member of this congregation was 100 percent reliable, and no one put us in danger.”

Jan and Johanna Stroomenbergh and their son died years ago.  Johanna, Jr., who used her middle name Susanna, died on her birthday, April 7, 2022.  She was 99.