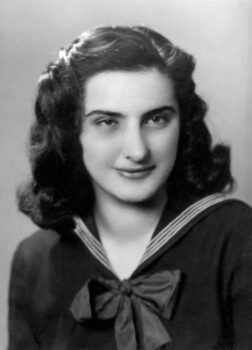 Cluj-Napoca, Romania… 1940 – Magdalena Maria Ana Stroe lived in Kolozsvar, known as Cluj-Napoca or Cluj in North Transylvania. In 1940, this region came under Hungarian rule.  Magdalena attended the Calvinist High School where she met Hanna Hamburg, a Jewish girl.  They became good friends. In 1942, due to Nazi edits, Hanna was no longer permitted to attend the Calvinist School. She transferred to the Jewish High School. Magdalena and Hanna remained close friends.

In the spring of 1944, when the Jews were ordered into the ghetto, Hanna went to see Magdalena to say good-bye.  Magdalena gave Hanna her own identity documents which included her birth and baptism certificates.  These documents enabled Hanna not to report to the ghetto and to leave the city. Hanna made her way to Budapest where she survived posing as a Christian on Magdalena’s documents.

Since Magdalena had no identity documents, she rarely left her home.  Nor did she seek new documents to replace the ones that were “lost.”  When she left her home, Magdalena would take her matriculation diploma.  Magdalena lived in fear of being stopped by the Hungarian police or a German soldier. There were several close calls.

Both Hanna and Magdalena survived the Holocaust.  Magdalena is in her 90s and lives in Bucharest.