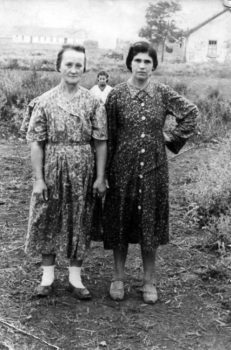 Dobrushino, Ukraine… December 1941 – Daria and Tsilya were neighbors in the small village of Dobrushino. Both were married and each had three young children. When the Jews were ordered to report with their belongings to the marketplace in the center of the village, Tsilya managed to separate herself and her three children from the group and made her way to Daria’s home. Daria lived in a small two-room house. There was no room for four more people including three young and “noisy” children.

For two weeks they all lived in Daria’s home. This gave Tsilya time to build an earthen bunker in the field just past Daria’s farm. Depending on the season, they would move from the house to the earthen bunker to a haystack near the house. This is how Tsilya and her children lived for more than three years.

Life was absolutely miserable for them. There was barely enough food for Daria and her children let alone Tsilya and her family. They were always hungry, exhausted and cold. It was hard for Tsilya’s children to remain quiet. In spite of a number of close calls, they managed to survive.

The village was liberated in April 1944 by the Soviet army. Tsilya and her children returned to their home which had not been destroyed during the war. Tsilya died many years ago. Daria died several years ago.