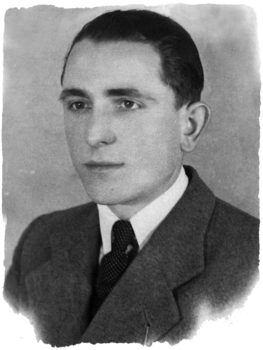 Belgrade, Yugoslavia… 1941 – On April 6, 1941, Germany, along with its allies Italy, Hungary, and Bulgaria, invaded Yugoslavia. The country was divided among the victors. Control of one section, the Independent State of Croatia, was given to the collaborationist Ustashe regime. Germany occupied the region of Serbia and quickly embarked on the destruction of Serbian Jewry.

Within days, Jews were ordered to register, to wear identifying insignia, and to abide by severe restrictions on movement and economic activity. By July 1941, Jews were being transported to concentration camps, and by August the mass murder of Yugoslavian Jewry had begun.

Aaron Hajon and his family had moved from their small village of Zvornik to Belgrade, Yugoslavia’s capital (now Serbia). His two sons had been killed by the Ustashe. Aaron saw the fate that was now befalling his fellow Jews in Belgrade and knew that he had to take drastic measures in order to save his family. Finding a hiding place was one option. Obtaining false identity documents was another. Aaron opted for the latter and asked Bogoljub Stevanovic, a childhood friend from Zvornik, for help.

Getting Serbian identification papers required two witnesses. Bogoljub testified that Aaron’s name was actually Aca Markovic and that he and his family were Christian Serbs from the village of Pilice. Bogoljub convinced a friend to vouch for Aaron. By providing this assistance, at risk of being arrested and killed, Bogoljub helped the Hajon family escape death.

When the war ended, Bogoljub learned that Aaron had opened a café in Belgrade. He visited Aaron and the two friends drank coffee and reflected on the horror of the war.

Aaron passed away years ago. Bogoljub stayed in contact with Matilda, one of Aaron’s daughters, until his death in April 2014.