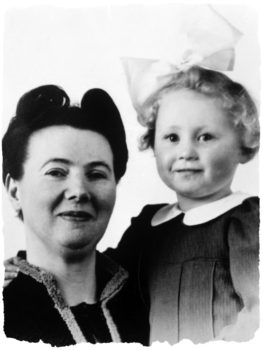 Groningen, the Netherlands… 1940 – In 1940, when the Germans invaded the Netherlands, Louisa Steenstra had worked for eleven years as a secretary in a shoe factory owned by the Marcus family. Her husband, Albert, was involved with the resistance. One day, while Louisa was visiting Anna Marie Marcus, the Germans burst in and took Anna Marie and her five-year-old twin boys to Westerbork, a nearby deportation camp. Anna Marie’s husband, Karel, had already been deported.

Before leaving her home, Anna Marie, while kissing Louisa goodbye, put her house key in Louisa’s hand and asked her to come back and pack some clothes for the children. Louisa went back to Anna Marie’s home, packed the clothes, and obtained a pass into Westerbork. After her trip to Westerbork, Louisa said, “I had a new fear of the Nazis. That day I saw what they could do.”

Louisa and Albert began hiding Jews. Albert built a hiding place on the second floor of their home. They hid four Jewish men. Three months before liberation, a neighbor informed on Louisa and Albert. On Sunday, January 21, 1945, the Germans raided their home. They took Albert upstairs and began searching for the hiding place. Louisa grabbed her three-year-old daughter, Beatrix, and ran to her mother-in-law’s home across the street. The resistance hid Louisa and Beatrix until they were liberated by the Canadians. When she returned to her home she found everything destroyed. Her husband and the four Jews had been killed.