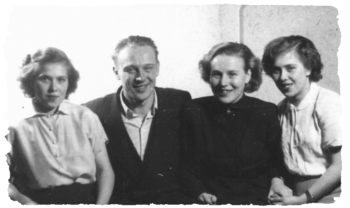 Boryslaw, Poland… Summer 1941 – Jozef Krzysztalowski lived in Boryslaw, Poland (now Ukraine), with his wife, Helena, and four children.  Elias Bander, a Jewish physician, lived in Belzyc, Poland, with his wife, Regina, and six-year-old son, Myron. With the outbreak of World War II, the Bander family fled East and arrived in Boryslaw in October 1939.  The area was under Soviet occupation.  In Boryslaw, Elias Bander continued to work as a doctor.

In the summer of 1941, the Germans occupied Boryslaw.  The Krzysztalowski family had to move to a very modest apartment – one room and in the courtyard a shed where Jozef kept pigeons, goats and pigs.  In August 1942, two ghettos were established in the town. The Bander family was already living in one of the newly designated ghettos.  Jozef and his family were patients of Dr. Bander.

At the beginning of 1943, the Karpathen-Oel forced labor camp was established in Boryslaw. Elias Bander managed to secure a place for his wife there and Myron stayed at the labor camp illegally.  They remained there until a hiding place could be found.  Elias continued to work outside the camp and was able to maintain contact with his former Christian patients.  In the summer of 1943, almost all of the remaining Jews in Boryslaw were murdered. The Bander family had managed to survive until then thanks to the relationships that Elias had with his Christian patients.  Now the last family with whom they had been hiding had decided to leave Boryslaw.  Elias and his family were without a hiding place or anyone to take care of them.  They were also completely destitute.

As the front came closer, the town filled with German soldiers.  The Krzysztalowski family lived in constant fear that the German soldiers, who were now lodged in their house and sought provisions in the courtyard for the army’s needs, would discover the three hidden Jews.  They did not.

Jozef and Helena died years ago.  Irena is in her 90s and lives in Warsaw, Poland.