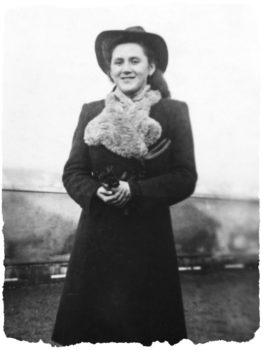 Bratislava, Slovakia… 1944 –  Rozalia and Jozef Kuchar and their daughter, Anna, were neighbors and very close friends with Benjamin and Edit Schwartz and their infant daughter, Otika, in Bratislava, Slovakia. The Kuchar and Schwartz families remained close friends even when all the Jews in Bratislava were forced to move into the ghetto in 1942. When the first round of deportations began that year, the Kuchars hid Edit’s brother, Fridrich Grunwald.

In autumn of 1944, Benjamin Schwartz was caught in a round-up, deported, and murdered in Auschwitz. Edit Schwartz, fearing for her life, fled with Otika to the village of Miloslavov. The two found temporary shelter with a family who knew that Edit and her daughter were Jewish. When it became too dangerous to remain in the village, Edit and Otika returned to Bratislava. Having nowhere to go, they went to the Kuchars. Without hesitation, the Kuchar family took the mother and daughter into their home.

Edit and Otika hid with the Kuchar family for several months. Fearing discovery, Rozalia found them another hiding place with a peasant farmer. When they could no longer stay with the farmer, Anna took the initiative to find them a safer place. She went to the mother superior of a nearby convent, asking for refuge for two Christian fugitives. The mother superior agreed and was able to find a small room for Edit and Otika. Anna visited the mother and daughter every day and helped Edit learn the Christian prayers so that she could blend in since no one at the convent knew she was Jewish. Edit and Otika remained in the convent until they were liberated in January 1945. Edit and Otika survived the war because of the support of the Kuchar family and the determination of their daughter, Anna.

In addition to the Schwartz family, Anna and her parents also provided food and shelter to five other Jews.

After the war, Edit and Otika moved to Israel. Edit Schwartz passed away years ago; Anna and Otika remain close.