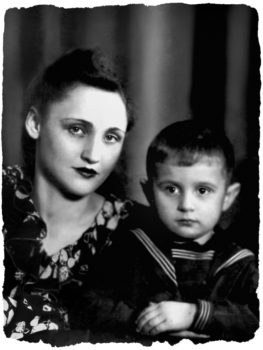 Kiev, Ukraine… September 1941 – Antonina Kurditskaya lived with her mother, Yelena, in Kiev. They had a good relationship with their Jewish neighbor, Klara Kagarlitsky. Both Yelena and Klara were widows with one child. Klara had a son, Moisey.

When Germany invaded the Soviet Union on June 22, 1941, life changed. Kiev was occupied on September 19, 1941. On September 29, 1941, all Kiev Jews were ordered to assemble near Babi Yar, a ravine at the outskirts of Kiev. Assuming a trap, Klara Kagarlitsky decided to go into hiding. She and Moisey spent the days at Antonina and Yelena’s home and in their own apartment at night. However, their luck soon ran out. Klara and Moisey were arrested in late October 1941, after their building custodian denounced them.

During the interrogation, Klara claimed that Moisey’s name was Mikhail and he was her step-son whom she was raising after her husband and his first wife died. The Germans released the boy under the condition that Moisey presented a birth certificate testifying to his non-Jewish heritage. Moisey turned to Antonina and Yelena for help. While they were unable to obtain the false birth certificate, Antonina and her mother gathered signatures of 25 residents of the neighborhood, who testified that the boy’s name was Mikhail and he was Russian. After handing in the document at the police station, Moisey was released. However, the Germans killed Klara. With no place to go, Moisey moved in with Antonina and Yelena. He stayed with them for the next four months. In order to protect the boy, neither Antonina nor her mother told anyone about Moisey hiding in their house.

Shortly after receiving a forged birth certificate, Moisey, now officially called “Mikhail,” was sent to a forced labor camp in Germany. After the war, Moisey came back to Kiev and stayed with Antonina and Yelena until he could manage on his own. Several years later he immigrated to Israel.