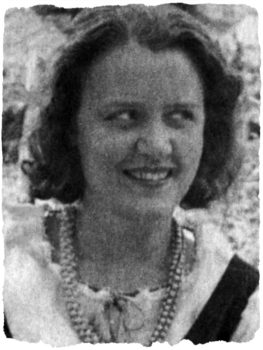 Sarajevo, Yugoslavia… October 1941 – In October 1941, the Ustashe, the fascist, pro-Nazi regime in Croatia, was rounding up the remaining Jews of Sarajevo, which was part of the Independent State of Croatia (now Bosnia). Isidor Baruh, who was among them, was walking near the home of Olga Kukovic when someone told him to go into hiding immediately. Olga, a Serb, lived with her young daughter in the city center. Because Isidor’s sister, Berta, was a friend and former classmate of Olga’s, Isidor ran to her home and asked her for help.

Olga sent her daughter, Liliana, to find Isidor’s other sister, Hanna, and to bring her to their apartment. Hanna came right away, carrying only her handbag. Hanna’s husband had already been taken away. It was clear that she and Isidor were also in grave danger. Olga decided that the only way to save Isidor and Hanna was to get them to Mostar, a nearby town in the Italian-occupied zone of Yugoslavia. Berta, along with Isidor’s wife and child, had already gone there. The Italian commander in Mostar refused to enforce the anti-Jewish measures called for by the Germans, so Jews were relatively safe there.

Olga knew that smuggling her Jewish friends out of Sarajevo would be risky. She had heard that some Jews had escaped from Croatia by posing as Muslims, who were not targeted by the Ustashe or the Germans. She decided to disguise the Jewish siblings in this way. Olga bought Hanna a long Muslim dress with a hood and a veil, and Hanna was able to travel to Mostar by train with her appearance concealed.

Because Isidor had red hair and facial features that the Nazis and their collaborators saw as typically Jewish, his task was more difficult than his sister’s. Olga used her imagination to help Isidor overcome these obstacles. First she had a hairdresser color Isidor’s hair black. She then bought him a fez, a felt cap that many Muslims wore, dressed him in Muslim garb, and took a photo of him. Olga bribed a policeman to make Isidor a fake identity card. She also made contact with a Muslim friend of Isidor’s who offered to help him get to Mostar. The Muslim man brought his Jewish friend to the train station, and Isidor boarded a train that brought him to Mostar.

Isidor, Hanna, and Berta all survived the war and returned to Sarajevo. In 1949, they moved to Israel. Olga visited them in 1964.

Olga Kukovic passed away in May 2006.