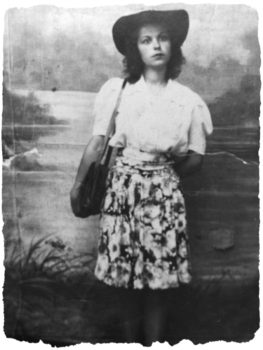 Mogilev, White Russia… November 1941 – Luba Kushkina, a Jewish girl, and Nadezhda Kurbanova were classmates and close friends. One day in November 1941, the Nazis marched a group of Jews to a newly dug mass grave to be killed. Nadezhda saw Luba in the crowd and pushed her out of the group. The two girls ran to Nadezhda’s house. Unfortunately, Luba’s parents and brother were not able to escape and were murdered by the Germans.

Nadezhda’s family hid Luba in their attic until winter. Nadezhda’s parents knew the penalty for sheltering Jews and feared for the lives of their own children. They decided that they could not protect Luba any longer. Nadezhda gave Luba her own identity card and a cross to wear so that she could pass as a Christian. Luba went to a nearby village and with Nadezhda’s ID was able to find a job. Because Nadezhda was now left without any documents proving her identity, she was arrested and sent to labor camp in Germany. She was kept there for four years. After the war, Nadezhda and Luba reunited and Nadezhda got her documents back.

Luba Kushkina lived for a time in Israel and then moved to Canada. Nadezhda Kurbanova passed away in January 2007.