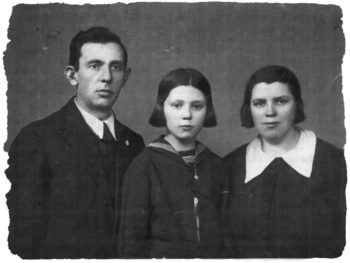 Katalin Kuron with her parents

Budapest, Hungary… June 1944 –  Istvan Kuron managed a large timber factory and storehouse in Budapest where Jewish slave laborers worked. Istvan and his family tried to help as many of the prisoners as possible. His daughter, Katalin, would send letters to their families, and his wife would make lunch for the prisoners. The factory was close to the Jewish cemetery. The caretaker of the Jewish cemetery was Mr. Brief who lived there with his wife and two children, Goldy and Marton. The families became friends. Mr. Brief was taken to a forced labor camp from which he never returned.

As the situation for Jews became worse, Katalin and her family decided to hide Mrs. Brief, Goldy, and Marton. At first, the three Jews lived in their house. When it became too dangerous, the Kuron family built an earthen bunker in their garden – this is where the Brief family hid. Katalin brought them food every day and took care of their basic needs. Goldy recalled, “Katalin told me, ‘My only wish is to save you.’” Katalin and her family hid the Brief family until January 1945 when they were liberated.

Katalin Kuron is in her 90s and continues to live in Budapest.