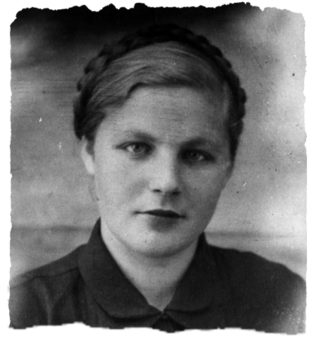 Yaltushkov, Ukraine… 1942 – Anna Kushnir and her children lived in the village of Yaltushkov, Ukraine. A few Jewish families also lived there, among them the Gluz family, which consisted of Leib-David, his wife, Menya, and their four children. When the Germans invaded in July 1941, they immediately began persecuting the Jews.  Leib-David was murdered in November. His wife, Menya, and their two daughters, Lyubov and Riva, escaped to another village, where they found work as agricultural laborers. In August 1942, when they were ordered to return to Yaltushkov, Menya and her daughters fled to the forest.

On August 19, an Aktion was carried out in Yaltushkov. Several days later, Menya and her daughters left the forest because they were starving and returned to Yaltushkov where they hid in the granary in the Kushnir’s garden. Anna agreed to hide the mother and daughters and sent her older children, Ivan and Klavdiya, to find food, soap, and fresh water for the Gluz family. The Kushnir’s also prepared a hiding place in the loft of the granary where the three Jewish women hid.

Anna, Ivan, and Klavdiya took care of all of their needs until Anna found a farmer who agreed to smuggle them on his cart to Transnistria. The Kushnirs provided the Gluz family with provisions for the journey.  Upon arriving in Transnistria, they were caught and put in the Kopaygorod ghetto.  Menya and her daughters spent the next fifteen months in the Kopaygorod ghetto, where they remained until the town was liberated by the Soviet army in March 1944.