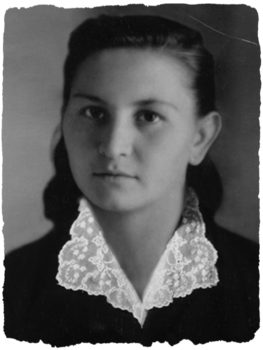 Within a week, they forced Israel and Fruma Davidson, their three children, Rachel, Mira, and Vova, and the entire Jewish population of Minsk and the surrounding region to relocate to a walled ghetto. Many Jews were murdered in sporadic acts of violence, and the first organized killing took place in August 1941. In this Aktion, the Germans rounded up thousands of Jews, transported them to the nearby town of Tuchinka, and killed them. Over the course of the next year, two more mass killings took place.

During each Aktion, the Davidson family sought help from Hanna Trafimava and her mother, Fatima Kanapatskaya, who were close family friends. Hanna and her mother had been smuggling food to Jews in the ghetto and hiding some who had escaped. They felt compelled to help Israel, Fruma, and their children survive. Through contacts outside the ghetto, the Davidsons received advance notice of the German plans for liquidating the ghetto. When the Germans were about to launch another Aktion, the Davidsons snuck out of the ghetto and hid in Anna and Fatima’s house. Unfortunately, the house was too small for the Davidson family to stay there permanently.

When the Germans escalated the violence and began rounding up Jewish males for deportation in June 1942, Fruma asked Hanna’s mother to hide her husband, Israel. Although Hanna and Fatima understood the added danger they would be putting themselves in, they allowed Israel to dig a deep hole in their barn, and he hid there until June 1943. At that time, the Davidson family, including Israel, went into the woods and joined the partisans, with whom they stayed for the remainder of the war. After the war, the Davidsons returned to Minsk and reconnected with Hanna and Fatima.

Hanna is in her 90s and continues to live in Minsk.