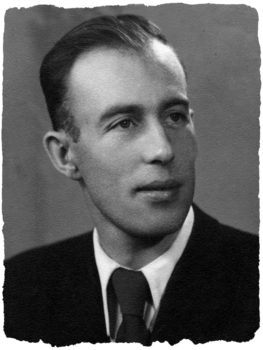 Brody, Poland… 1942 – In 1942, the deportation of the Jews of Brody, Poland (now Ukraine), had begun. The Ukalo family offered shelter to their neighbors, Dorothy and her infant daughter, Sabina, along with Dorothy’s step-mother, sister, and brother-in-law. They stayed for several months, until it became too dangerous. Walter’s father, Gregory, was killed by the Germans at the end of 1942 because he was suspected of hiding Jews. By that time Walter had moved the Jews who were hiding in the Ukalo home to another location. At one point, Dorothy and Sabina moved back to the Brody ghetto where Walter continued to bring them food.

Walter smuggled Dorothy and Sabina out of the ghetto and once again took them into his home until he had to find them another place to stay. This time Walter found a Ukrainian peasant who agreed to provide shelter. Since the peasant was so poor, Walter brought him firewood and food. In addition to Dorothy and Sabina, Walter persuaded the peasant to hide Dorothy’s sisters, Bronia and Regina.

In 1943, Walter joined Zegota, a unit within the Polish underground that was established to help Jews in hiding. He operated out of the Lvov branch where he worked with Wladyslawa Choms, who was known by the Jews as the “Angel of Lvov.” Walter was introduced to Mrs. Choms by Klara Chotiner, a Jew whom Walter had hidden along with her baby. Walter worked tirelessly for Zegota, traveling the countryside looking for Jews and supplying them with false papers, money, clothing and shelter. Through Zegota, Walter was able to obtain papers that claimed he was disabled, enabling him to spend all his time pursuing his rescue activities. Walter worked for Zegota until the end of the war.

Following the war, Walter married Dorothy and adopted Sabina. They moved to the United States and settled in the Bronx. The Foundation provided financial support to Walter until Dorothy’s death in 1992. After Dorothy died, Walter refused to accept any funds from the Foundation. He maintained contact with many of the Jews he saved and visited Israel to see them.