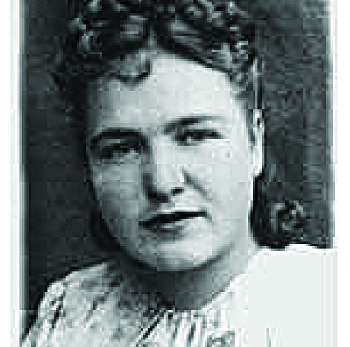 Zosina, Poland… November 1942 – On November 22, 1942, the Germans liquidated the ghetto in Dunilowicze, Poland. They herded the Jews into a large barn and proceeded to murder all 888 men, women, and children. Fearing such a day would come, Jeremiah Slawin and his family had already made preparations to try to save themselves. Jeremiah and his son, Leo, 11, had dug a hole under a dilapidated shed behind their house. On the day the ghetto was liquidated, Jeremiah took his wife Sonia, his son Leo, and his daughter Basia, 13, into the secret hiding place. From their bunker they could hear the screams and shots as the Jews of Dunilowicze were murdered. After three nights in their hiding place, they knew they could no longer stay there, and they fled into the woods.

The Slawin family sought food and shelter from several farmers. They were turned away repeatedly. Finally, they arrived at the farm of the Anishkewicz family who Sonia knew from the general store she ran before the war. Celina Anishkewicz opened the door and immediately took them into her home, placed them near the stove for warmth, and cooked them a hot meal. A widow, Celina lived with her two daughters, Wanda, who was then 17, and Bolesia, 14. Their family was very poor, their house was old, and they barely had enough to eat. But whatever they had they shared with the Slawin family. Celina’s married son, Jozef, would visit often, bringing food and assistance. Jozef helped dig a hole under the floor behind the stove. The Slawins lived in the house but hid in this hole whenever people would approach. Wanda and Bolesia also cooked their food, washed their clothes, and always stood guard at the window.

While there was constant fear that they would be discovered and killed, Celina always had words of encouragement and said that God would help them all to survive and find freedom. The Slawins stayed there until the spring of 1943 when the war situation began to improve. With the onset of warmer weather, and fearing that Celina and her family would themselves be killed for hiding Jews, the Slawins moved to a hiding place in the woods near the farm. The Anishkewicz family continued to provide them with food. Leo Slawin writes, “We will never forget the Anishkewicz family. We owe our lives to them.”

In 1999 the JFR reunited Wanda Anishkewicz with Sonia, Leo, and Basia Slawin. The documentary retelling their story can be viewed here.