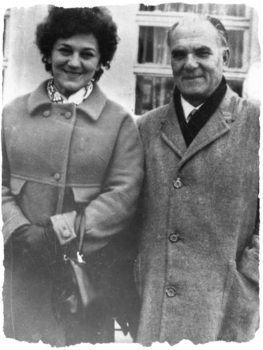 Tirana, Albania…October 1943 –  When the Nazis invaded the former Yugoslavia in 1943, Lew Dzienciolski, a Jew who had already fled from Poland, escaped to Tirana, Albania, where he thought he might find refuge.  He found temporary shelter with his relatives, Mikele and Vjera Kilic, who were living in Tirana.  Soon the situation in Tirana worsened, and Mikele and Vjera Kilic decided to flee to the Albanian countryside to hide.  Lew who was sick and half-blind was unable to flee with his relatives.

Mikele Kilic asked his friend Dr. Bessim Zyma to hide Lew.  Dr. Zyma, who was the founder of Otolaryngology in Albania and had his own private medical clinic in Tirana, agreed to take care of Lew.  Dr. Zyma and his wife, Hiqmet, hid Lew in the clinic, providing not only a place of refuge, but also the proper medical treatment.  When Lew needed to go outside or when patients came to the clinic, Dr. Zyma wrapped Lew’s face in bandages so no one would discover his identity.  Lew stayed in the clinic from October 1943 until April 1944.

When Lew recovered his health, he left Tirana to join Mikele and Vjera who were hidden at the Monastery of Ardenica near Lushnje, Albania.  In late 1944, Lew escaped to Italy.