At this year’s dinner, The Jewish Foundation for the Righteous will reunite Helena Weglowska Szachniewicz, a rescuer from Poland, with Mira Wexler Gutfilen, the Jewish girl she and her family saved.  They have not seen each other since 1945. 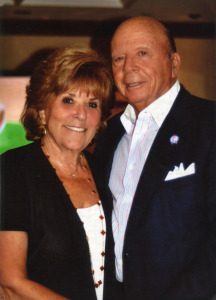 Iris and Saul have been married for 55 years.  They have three married children and are blessed with eight grandchildren.  Their universe embodies their family as they spend quality time, sharing life together.  Following the example of their parents, each of the adult children are fully engaged in charitable work of their own.  And that legacy of giving back to society continues as it is passed on to their grandchildren.

After helping her husband start his career as Co-Founder and President of Sterling Equities, and launching their children on their educational and social pathways, Iris began volunteering for various not-for-profit organizations.

Thirty years ago Iris began an ongoing, hands-on relationship with the Henry Viscardi School at the National Center for Disability Services, where she continues to work with severely disabled children in their classrooms.  She has also served as Chairman of the School Board and on many committees of the Center’s Board.  Currently, she chairs the Development Committee, helping to raise millions of dollars each year.

Iris also lends her experience and expertise to numerous other charitable and civic organizations. Currently, she serves as an Associate Trustee of the North Shore – Long Island Jewish Health System and the Jewish Foundation for the Righteous.

Additionally, Iris is President of the Katz Family Foundation, where she not only approves grants to many different charities, but is also a hands-on participant, vigorously supporting programs and organizations focused on hunger and nutrition, the needs of senior citizens, and the homeless.

Iris in partnership with Saul is now focused on strengthening women’s health services through the creation of the Katz Institute for Women’s Health of the North Shore – Long Island Jewish Health System, which is benefitting women and families throughout the region.  In addition, their support has led to the creation of the Katz Women’s Hospital built on the campuses of both North Shore University Hospital in Manhasset, NY, and Long Island Jewish Medical Center in Queens, NY.

Saul is Co-Founder, President and Chief Operating Officer of Sterling Equities, a diversified investment company. Although the company’s main concentration is real estate, with investments in 43 US states, it also includes business divisions that concentrate on venture capital, money management, sports and entertainment.

Saul’s relationship with the New York METS began in 1980, when he acquired a partnership interest in the team.   His role expanded in August 2002, when he became President and Co-Owner.  In 2005, Sterling Equities formed SportsNet New York (SNY), with Saul serving as Chairman.

Saul has been involved in many not-for-profit organizations, including the Brooklyn College Foundation, UJA Federation of New York, and the Jewish Association for the Aged (JASA), with his main focus on healthcare.

Iris and Saul are humbled to be honored by the Jewish Foundation of the Righteous – an organization that recognizes and honors the righteous gentiles who set the moral compass to which all of us should aspire.