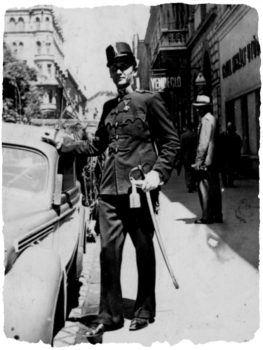 Budapest, Hungary… October 1944 – On March 19, 1944, the Germans occupied Hungary and immediately began to murder the last remaining Jewish community in Europe. By October of that year, most of the Hungarian Jews had been deported to Auschwitz-Birkenau. Because of international pressure, the deportations of Hungarian Jews stopped in the fall of 1944. On October 15 the deportations resumed; the next day nine Jews fled from the ghetto and hid in a warehouse. They were discovered by a Hungarian who reported them to Gyorgy Bobaly, a police officer.

Gyorgy said to the Jews, “Don’t you know they kill people who hide?” The Jews begged Gyorgy to help them, and he decided to do so. He took the Jews to an upstairs apartment, closed all the windows, and forbade them to go outside. He then spoke with the superintendent of the building. In the evenings Gyorgy sent food and checked on the Jews in hiding. They remained in the apartment until liberation.

Of the nine Jews in hiding, six survived. In the words of the Jewish survivors, “Gyorgy Bobaly risked his own life to save ours. He is why we are alive today.”