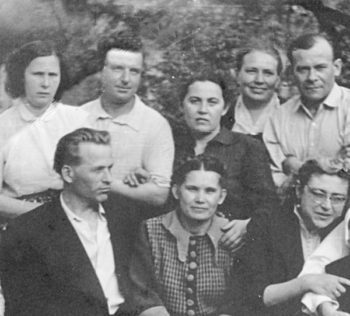 Kiev, Ukraine… September 1941 – Mariya had married a Jewish man, Igor Sklyanski. They had two children, four-year-old Aleksander and two-year-old Georgiy. By Nazi racial law, the children were considered Jewish. Igor was serving in the Soviet army and was not in Kiev when the Germans occupied the city on September 19, 1941.

On September 29, 1941, the Jews of Kiev were ordered to report for resettlement. From there the Jews were marched to the ravine called Babi Yar where they were killed. Mariya decided not to take her sons to the assembly point. Instead she went to the home of her mother, Malvina Zamchenok. Malvina also lived in Kiev and had a ground floor apartment. In order to save the lives of her grandsons, Malvina gave shelter to Mariya, Aleksander, and Georgiy.

The presence of the two boys was discovered by their neighbor, Yevgenia Bobovik, a widow with two children, Viktor and Olena. The Bobovik family offered to help Malvina with Aleksander and Georgiy. They dug a tunnel connecting Malvina’s cellar with their own.

During raids, Aleksander and Georgiy would remain in the cellar passageway where Olena would stay to keep them quiet. In November 1942, neighbors informed the police that there were children living in Malvina’s apartment. Yevgenia was summoned to the police station and was questioned about Malvina and Mariya. Yevgenia said that her neighbor was a Lithuanian woman living with her daughter and she never saw any children. From then on, the families were very careful to keep the two young boys hidden and as quiet as possible.

The boys remained in the cellar until November 6, 1943, when Kiev was liberated. After the war, the two families remained close friends.

Olena Bobovik passed away in 2019.