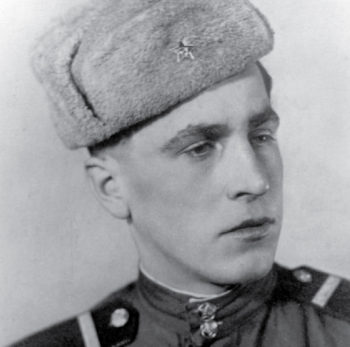 Kiev, Ukraine… Fall 1941 – In September 1941, the Germans occupied the city of Kiev.  On September 29, 1941, two weeks following the occupation, all Jews in Kiev were ordered to report for relocation.  Included among the Jews was fifteen-year-old Ruvim Shtein. From September 29-30, German mobile killing squads murdered some 33,000 Jews in a nearby ravine called Babi Yar.  His mother and sister were murdered.  Ruvim managed to escape.

Ruvim made his way back into town and hid in a water pipe.  He wandered the city for a week before he came to the Bobrovsky home, which included Mariya Bobrovskaya and her sons Mikhail and Nikolay, and begged for help.  Ruvim was a school friend of Mikhail and Nikolay. Mariya Bobrovskaya and her sons agreed to take Ruvim in despite the risk involved.  Their house was on the edge of the city next to a cave that the family used for storage.  They hid Ruvim in the cave.  Mikhail and Nikolay worked to get Ruvim a stolen birth certificate of a Christian student from their school.

When Ruvim received the birth certificate he left the safety of the Bobrovsky house so as not to endanger his friends and went to a remote village in the east.  After the area was liberated by the Soviets; Ruvim joined the Soviet army. He returned to Kiev in 1951 and reconnected with the Bobrovsky family.