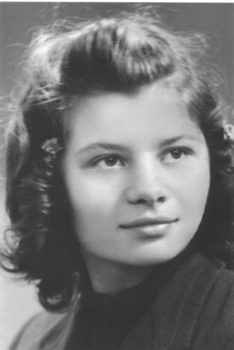 KRAKOW, POLAND… Autumn 1942 – Teresa Bobrowska lived with her parents, Helena and Julian, and her three siblings in Krakow. The Bobrowski family were good friends with their Jewish neighbors, Mr. and Mrs. Steinfeld and their children, Zeev and Rachel. Shortly after Germany invaded Poland in September 1939, life changed for both families. Teresa’s father was in the Polish army.  He was arrested and sent to Auschwitz, where he died. With the birth of their third child, Esther, the Steinfeld family left Krakow and went to a nearby town, Bochnia, where they soon were forced into the Bochnia ghetto.

During an Aktion in the ghetto, Mr. Steinfeld was caught and sent to a death camp. His wife and children, who managed to escape the Aktion, returned to Krakow in the autumn of 1942, and sought help from Teresa and her family.  Despite the danger involved with helping Jews, Helena Bobrowska and her children, welcomed the Steinfeld family into their home. Because of the risk of being denounced by their neighbors, Mrs. Steinfeld and her three children could stay just one night in the Bobrowski apartment. The next day the Steinfeld family left Teresa’s home with food, clothing, and a small amount of money given to them by the Bobrowski family.

The Steinfelds managed to avoid capture by the Germans for some time. During this time Esther died. Unfortunately Mrs. Steinfeld, Zeev, and Rachel were picked up in an Aktion and were put on a transport to Auschwitz.  Rachel escaped from the transport and went back to Teresa and her family who immediately gave her shelter.  The Bobrowski family obtained false documents for Rachel who then left for Slovakia. From there Rachel traveled to Palestine. Zeev survived the war and was reunited with his sister in Palestine.