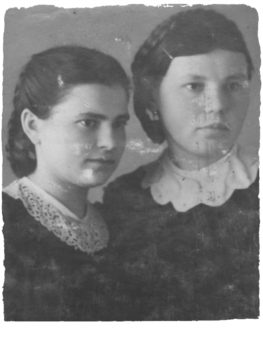 Galina Burtschik with a friend

Pereyaslav-Khmelnitsky, Ukraine… 1943 – When Germany invaded the Soviet Union in June 1941, Galina Burtschik had been on holiday visiting her grandmother. Fearing for Galina’s safety, Anna left her home in Kiev to get her daughter. Anna arrived in the village only to become trapped in Pereyaslav-Khmelnitsky. It was not possible for them to return to Kiev.

In 1943 while Anna was purchasing food, she was approached by four bedraggled children—brothers and sisters, aged four to thirteen. Anna did not recognize the children at first. Before the war, Anna, who had grown up in the village, had worked with the children’s parents. Anna learned that the children’s mother had been murdered in an Aktion. Anna felt compelled to help these four brothers and sisters. She took them to her mother’s home.

There was no food in the village; everyone was starving. Anna and Galina ate grass and traded their personal belongings for food. Three of the neighbors knew that Anna and Galina were sheltering the Jewish children and brought potatoes, beets, and milk to help feed them. Galina took responsibility for the children. Despite the risk, Anna and Galina never thought of leaving them.

When the war was over, the children were reunited with their father. Galina and the children have remained in touch with each other over the years.