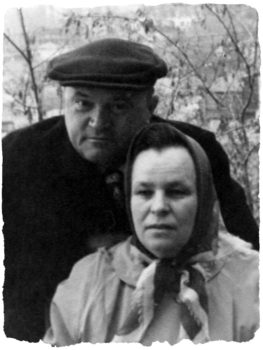 Kiev, Ukraine… September 29, 1941 – On September 29, 1941, all the Jews in Kiev were ordered to assemble at a designated location for resettlement.  Signs were posted throughout the city saying, “Those who sheltered Jews would be killed.” The Jews were then marched to Babi Yar, a ravine on the outskirts of Kiev, where they were murdered.

Among the Jews rounded up were Petr Ekel and his son, Yakov. When it was their turn to be shot, Petr pushed his son into the ravine and fell on top of him. The shooting went on for hours.  When it was dark, Petr and Yakov crawled their way out of the ravine. They sought out Afanasij Chaika, a childhood friend of Petr’s.  The Chaika family was shocked to hear about this terrible tragedy and they offered to take in Petr and Yakov despite the risk.

Afanasij Chaika and his wife Fedora Chaika died years ago.