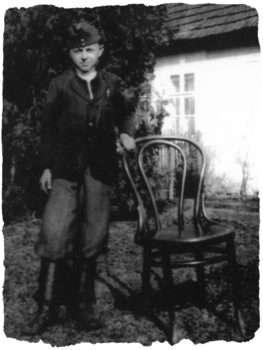 Simleu Silvaniei, Romania…1944 – When Germany and its ally Hungary occupied Romania in 1944, many of the Romanian young men were drafted into the military. The Romanian army was soon pressured by the Germans to persecute Romanian Jews and confiscate their possessions. Alexandru Chereches, a teenager, was forced to become a member of the military and had to participate in this confiscation.

He often witnessed terrible cruelty towards Romanian Jews, which affected him deeply, as he had grown up in a family that had Jewish friends.

Soon after the occupation, all Romanian men were rounded up for forced labor. This included Alexandru’s father, Stefan, who managed to escape and hid on the family’s estate, which included a forest and an orchard.

Alexandru was living on the estate with his mother, Ana, and his grandfather. One day when Alexandru was in the orchard with his dog, the dog started barking. The dog led Alexandru to a Jewish man who was hiding in the forest. The man, Josef Lax, told Alexandru that two other Jews, Solomon Shlomo Katz and Josef Adler, were also hiding in the forest. Alexandru informed his mother and grandfather about the Jews. The family decided to take care of not only Stefan, but also the three Jews and to provide them with food and clothing.

Later, when Alexandru was attending a mandatory meeting for the military, he overheard a conversation about a rumor of Jewish and Romanian refugees hiding in his family’s forest. Alexandru immediately left the meeting and ran home to inform his family. Worried that they would all be caught and killed, Ana brought the three Jews and Stefan to a house on the Hungarian-Romanian border, where they were hidden until liberation.

In 1945 Josef Lax returned to Simleu Silvaniei and Alexandru attended his wedding. Lax opened a store, and he would frequently tell customers when Alexandru was in the store, “Look at this child, he saved my life!” Josef Lax later immigrated to America.

Alexandru Chereches passed away in March 2013.