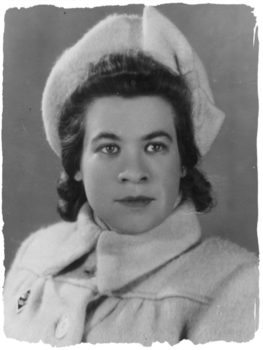 Dnepropetrovsk, Ukraine… January 1942 -Nadezhda Chernova, a twenty-year-old student, and her mother, Anna, a lawyer who lost her job after the Germans occupied their city and closed the court, struggled to make it through the winter of 1942. They had to trade clothes and other belongings to obtain food. One day in January of that year, they heard a knocking at their door. It was an unfamiliar man, dressed in rags and overcome with exhaustion. The man turned out to be a colleague and friend of Anna.

Sevastian, a Jew, had nowhere to go and no one to turn to, so he sought out Anna and Nadezhda hoping they might be kind enough to help him. Nadezhda and Anna decided to hide him. They fed the starving man and gave him clothes that had belonged to Nadezhda’s late father. When neighbors or visitors were around, they hid Sevastian in a large box. No one ever saw him. Months later, Sevastian joined the Soviet army and survived the war.

Anna and Nadezhda were rounded up by the Germans and sent to Germany as forced laborers.   Anna died in Germany in 1945, days after liberation.  Nadezhda returned to Dnepropetrovsk.

Nadezhda Chernova passed away on October 30, 2016.