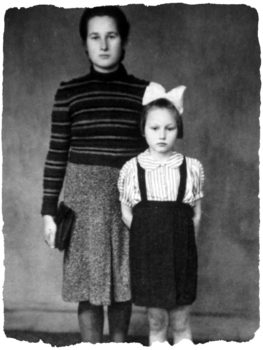 Przemysl, Poland… 1942 – Stefania Podgorska lived with her family in a village near Przemysl. She moved to Przemysl before the outbreak of the war and found work with the Diamant family who was Jewish. The Diamant family treated Stefania like a daughter and she moved in with the family when the Germans occupied Przemsyl on September 15, 1939. The abuse and murder of Jews began within days of the German occupation.

Przemysl was located in the part of Poland that was to be occupied by the Soviet Union as part of the division of territory agreed to under the Molotov-Ribbentrop Pact. On September 28, 1939, the Soviets occupied Przemysl.  Under the Soviets, the lives of the Jews changed greatly. When the Germans reoccupied Przemysl on June 28, 1941, there were about 16,500 Jews in the city.

With the German occupation of Przemysl, life for the Jews became increasingly difficult.  A series of anti-Jewish edicts were announced. On July 16, 1942, a ghetto was established and the Diamant family was forced into the ghetto. Stefania remained in contact with the two brothers, Munio and Henek, after they went into the ghetto.

At this time, Stefania’s mother and brother were taken to Germany as forced labor, leaving Stefania’s younger sister, Helena, alone. Helena, who was eight years old, came to live with Stefania.

During 1942 and through the summer of 1943, there were a series of deportations from the Przemysl ghetto. Munio and Henek managed to survive the deportations and killings.

During the September 1943 liquidation of the ghetto, Munio and Henek managed to escape and arrived at Stefania and Helena’s cottage. Over the next several days, Stefania and Helena agreed to hide another 11 Jews. The sisters hid the 13 Jews in the attic of the cottage. Stefania worked in a factory and used all of her salary to purchase food for the 13 Jews the sisters were hiding.  Helena took away their body waste, washed their clothes, helped prepare food, and stood guard. Food was scarce, Stefania and Helena did their best to make the Jews as comfortable as possible. It was very hard for the two young sisters.

The Germans set up a hospital across the road from Stefania’s cottage and started taking over homes and apartments in the area. The SS moved into one of her two rooms. They stayed for seven months with 13 Jews living over their heads.

Stefania and Helena hid the 13 Jews until Przemysl was liberated on July 27, 1944.

After the war, Stefania and Munio, now called Josef, were married. They immigrated to the United States. Josef died years ago.

Because of the bravery and ingenuity of Stefania and Helena, the thirteen Jews they hid all survived the Holocaust.

Helena and Stefania performed true acts of heroism.  They were recognized as Righteous Among the Nations by Yad Vashem in 1979.  Stefania died in 2018 at the age of 97.  Helena is in her late 80’s and continues to live in Poland.