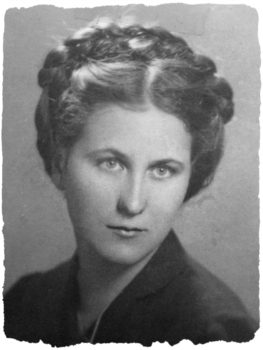 At the end of 1941, the Jews of Kalusz were forced to move into the ghetto. Paulina and her father, Zacharias, acted as couriers, smuggling notes in and out of the ghetto. As a result, many Jews trusted the Plaksej family – they knew that if they were able to escape from the ghetto through the sewer system, they could seek the family’s help.

The first family to escape was Sara and Solomon Shapiro and their son, Chaim. They hid at Paulina’s house. When it became too dangerous for them to stay there, Zacharias found a safer place for them to hide. He brought Sara, Solomon, and Chaim to a trusted friend who was already hiding Jews in a bunker beneath his barn. Later, another Jewish woman, Rozia Unger, escaped from the ghetto and sought out the Plaksej family. They also brought her to the farmer’s bunker. Paulina regularly brought whatever food and supplies were needed. Sara, Solomon, Chaim, and Rozia, along with thirteen other Jews, stayed in this bunker for over a year. To this day, the identity of the farmer is not known.

In 1942, Miriam Helfgot escaped from a transport to Belzec and made her way to the Plaksej house asking for shelter. Although Paulina and her family did not know Miriam, they agreed to give her shelter and she was hidden in a wardrobe for months. Zacharias obtained forged papers for Miriam and took her to another village where she would not be recognized as a Jew. There the Germans, believing she was a Pole, picked her up as a forced laborer. After the war, she reunited with her husband and daughter. Due to the efforts of Paulina and her family, all of the Jews they helped survived the war.