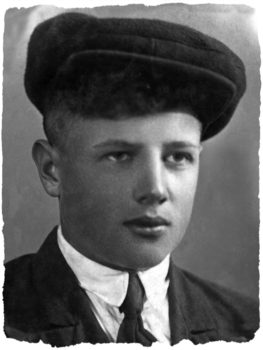 Vodyana, Ukraine… 1942 – Grigori Lantsman was a Jewish pilot in the Soviet army when his plane was shot down over Ukraine. Surviving the crash, Grigori wandered the countryside seeking shelter. The Germans had already killed his family and wiped out his regiment.

By chance, Grigori met Volodimir Chornovol, a Ukrainian teacher, who was out for a walk. Grigori told Volodimir that he was Jewish. Volodimir understood that without assistance, Grigori would surely be caught and killed. He offered to take him in.

With great difficulty, Volodimir was able to obtain Ukrainian identity papers for Grigori. But soon the Germans were forcibly taking young Ukrainian men for hard labor. Grigori was one of those selected. He managed to escape from the train and returned to the safety of Volodimir’s home. Though there were many close calls, Volodimir was able to hide Grigori until the area was liberated in May 1944. Grigori then joined the Soviet army and fought until the end of the war. After the war, Vladimir and Grigori remained in contact.

Volodimir Chornovol passed away at the age of 101 in December 2022.