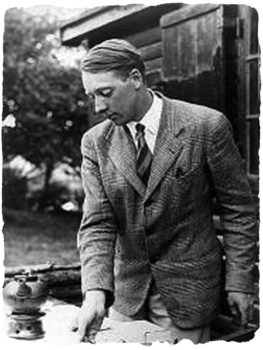 Copenhagen, Denmark… October 1943 — Knud Christiansen’s fiancée, Karen, lived in Berlin in the 1930s and often wrote letters home describing the rise of Hitler and the Nazi party. Knud traveled to Berlin as a member of the Danish rowing team for the 1936 Olympic Games and saw firsthand what his fiancée had described.  Knud and Karen married in 1938.  Two years later, in April of 1940, Germany occupied Denmark. By September 1943, it became apparent that the Germans were going to initiate anti-Jewish measures in Denmark.

One night, from his window, Knud saw steamers in the harbor and immediately knew that they would be used to deport Jews.  He warned his Jewish friends, the Philipsons, to spend the night at his apartment. The next day they decided to return to their home where they were arrested and deported to Horserod, an internment camp.  Knud visited the camp commandant and offered him a tub of butter to release the Philipsons. The commandant, fearing retribution from his superiors, did not agree to the release. Undeterred, Knud arranged a meeting with Dr. Werner Best, the German Reich minister in Demark.  Knud secured the release of the Philipsons by promising to produce a propaganda film in which Germans were portrayed as friends of Denmark. The film was never produced.

Knud and Karen joined the Danish resistance and, along with many other Danes, worked to rescue Jews.  Karen’s father, Dr. Holger Rasmussen, was Denmark’s Chief Naval Physician as well as the physician to King Christian X. He owned a villa in Espergaerde, a coastal village north of Copenhagen, and used his home as a drop point for Jews escaping from Copenhagen. From there, thousands of Jews were able to cross the Øresund, the body of water between Denmark and neutral Sweden.

During October, November, and December 1943, Knud ferried one Jew at a time across the Øresund using his Olympic racing boat and his skills as an Olympic rower. In time the resistance began to use larger fishing boats that could carry a greater number of Jews. Even after Denmark’s Jews were safely evacuated from the country, Knud and Karen continued their resistance efforts until the end of the war.