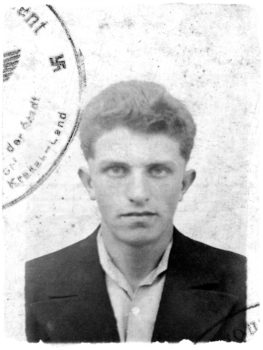 Nowa Gora, Poland… March 1941 – The Germans began rounding up Jews and forcing them into the Krakow ghetto in March 1941. Bernard Feiler and his future wife, Lola, escaped the round-up and sought shelter at the home of their friend, Eugeniusz Chucherko. Bernard’s father had owned a store in the small village of Nowa Gora, where the Chucherko family lived. Eugeniusz used to fight the local kids, defending Bernard, when they beat him up for being Jewish. When Bernard and Lola arrived at the Chucherko home, nineteen-year-old Eugeniusz and his family knew they had to help.

Neighbors of the Chucherko family had been taken by the Germans for forced labor. They asked the Chucherko family to take care of their home while they were “away”. Their two-room house was on the outskirts of town, close to the German border patrol. Nevertheless, Eugeniusz and his family built a false wall in a room of their neighbor’s home where Bernard and Lola could hide. To avoid arousing suspicion from local villagers, the Chucherko family bought a cow to keep in the stable, which was part of the house.

Every week, Eugeniusz hid food for the Jews in the bales of hay that he brought for the cow. He also filled the water barrels with fresh water.

Soon after Bernard and Lola arrived, Eugeniusz made plans to hide Bernard’s brother, sister-in-law, Sala, and Sala’s brother, Yitzhak. They had also run away from the round-up and were hiding in Krakow. Eugeniusz traveled thirty kilometers each way, by foot and train, to Krakow to bring the three Jews to the hiding place, one at a time. This was extremely dangerous, since there were German soldiers on the train, and they had to pass through German checkpoints where they would need the proper identification, which they did not have. Nevertheless, each arrived safely, and Eugeniusz and his family hid and protected them for more than three years until liberation in 1945. While they were in hiding, Yitzhak died. Under cover of darkness, Eugeniusz buried him under the house.

In 1954, Eugeniusz was forced out of the Polish army for hiding Jews during the war. Eugeniusz Chucherko passed away in 2003.