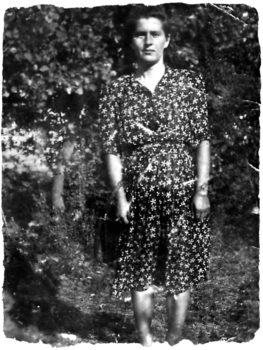 Kajetanowka, Poland… 1942 – Sara and Joseph Beiman lived with their six-year-old daughter, Rozia, in Lublin, Poland. Sara and Joseph employed Wanda Dudziak and her aunt, Karolina Dworczyk, to help in the home.

When Germany invaded Poland on September 1, 1939, life changed for the Jews of Poland. In 1942, Sara and Joseph traveled to Krakow to obtain false identity documents so they could pass as Christians. Since it was too dangerous to travel with Rozia, Sara asked Karolina to look after Rozia for the few days it would take them to travel to Krakow.

The Beimans were successful in obtaining false identity documents, but only for Sara. They returned to Lublin with plans to make another trip to Krakow. Weeks later, Sara and Joseph returned to Krakow in order to obtain forged documents for Joseph, again leaving Rozia with Karolina. On their way to Krakow, Joseph Beiman was stopped by the Germans and taken into custody. Sara returned to Lublin to collect money in order to bribe the Germans to release her husband. She went to where the Germans had taken Joseph. Sara and Joseph were never heard from again. It is believed that they were murdered in Majdanek.

When Sara did not return, Karolina realized that Rozia was now an orphan. Karolina was afraid to keep Rozia as the Germans had established a post across from her home. She feared that the Germans would discover Rozia and they would be killed. Wanda’s mother, Tekla, visited her sister, Karolina, to see how Rozia was doing. Realizing the danger that they were in, Tekla said she would take Rozia to her home in the small village of Kajetanowka.

Tekla Dudziak was a widow with four daughters, Wanda, Janina, Maria, and Wladyslawa. Tekla’s husband died in 1927. The family was poor and lived on a small farm. Yet they felt obligated to take care of Rozia. They told everyone that Rozia was Karolina’s daughter, Jadwiga, and Tekla was having her “niece” come live with her in the village rather than remain in Lublin. Since Wladyslawa was the youngest sister and the one closest in age to Rozia, she had most of the responsibility for caring for Rozia.

The Dudziaks were devout Catholics. They taught Rozia Catholic prayers and she went with the family to church each week. During the two years that Rozia stayed with Wladyslawa and her family there were a number of close calls.

Lublin was the first city liberated in Poland by the Russian army on July 24, 1944. Rozia survived the war thanks to the help, love, and devotion of Wladyslawa, her mother and sisters.

Rozia remained with the Dudziaks until 1945, when she left for Israel. Every member of Rozia’s family living in Eastern Europe was killed during the Holocaust. When Rozia, which is Rose in Polish, arrived in Israel she changed her name to Shoshana, which is Rose in Hebrew.

Tekla, Wanda, Janina, and Maria Dudziak died years ago. Wladyslawa Dudziak is in her 90s and lives in Lublin, Poland.

In 2012 the JFR reunited Wladyslawa Dudziak with Rozia Beiman. The documentary retelling their story can be viewed here.