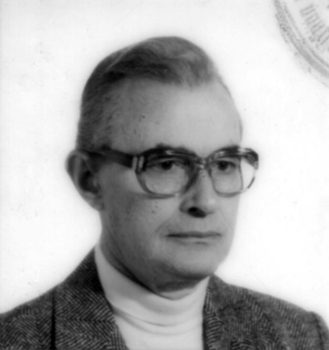 GOSPIĆ, YUGOSLAVIA… 1941 – On July 13, 1941, the Ustasa regime of the Independent State of Croatia ordered the Jews of Varazdin – 600 men, women, and children – to assemble and sent them in cattle cars to Gospić (now in Croatia). There, the men were sent in chains to the Jadovno concentration camp, where the local young men were ordered to murder the men by slitting their throats. The women and children did forced labor until Gospić became part of the Italian zone. Then the Ustasa sent the women and children to another camp where they were murdered.

Elza Polak and her two-year old daughter, Jelena, were among those doing forced labor. When Elza saw that Jelena had become dehydrated and had a high fever, she brought her to the hospital that she passed every day on her way to work. Fearing for her daughter’s life, Elza asked Dr. Ante Fulgosi, a medical student, for help. Knowing that his supervisor was helping Serbian children, Ante felt comfortable asking for his permission to admit the young mother and child. He created a false diagnosis and forged paperwork for Jelena.

After Gospić became part of the Italian zone, Elza and Jelena left the hospital with another young Jewish woman from Varazdin, whose fiancé awaited her in the Italian area. The four obtained papers from an Italian officer and traveled to Zadar, Croatia, where they lived for two years as gentiles. After the Allies bombed Zadar, Elza and Jelena went to another town in Croatia, where Elza assisted the partisans as a medical worker. When the Americans liberated Zadar in 1944, Elza was reunited with her husband and Jelena with her father, whom she did not recognize after years of being apart.