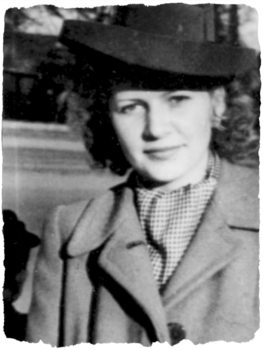 Warsaw, Poland… December 1940 – On October 12, 1940, German officials announced the establishment of the Warsaw ghetto; all Warsaw Jews were to move into the designated area within a month. Because of the dense population and scarce resources, ghetto residents struggled to survive.

This bleak situation motivated the Shapiro family to escape. In order to survive, the family had to separate. Mr. Shapiro escaped from the ghetto and fled Warsaw. Mrs. Shapiro managed to obtain false identification stating she was Polish, and she passed as a Christian for the remainder of the war. Their son, Joe, a blond, blue-eyed six-year-old, was taken in by Lidia Furmanski.

Before the war, the Shapiros had rented an apartment in Lidia Furmanski’s mother’s house. Since Lidia’s mother was not comfortable sheltering a Jewish child, Lidia took him to her apartment. He stayed in her apartment for four years.

Towards the end of the war, the police began searching homes for hidden Jews and arresting people. Lidia took Joe and fled from Warsaw. For weeks they walked at night to avoid German patrols. They survived the journey on vegetables given to them by people who did not ask questions. When they could not find food for free, Lidia sold her watch and her ring to feed herself and Joe. Once they reached Krakow, they hid with friends for a month until the city was liberated by the Soviet army in January 1945. When the war ended, Lidia took Joe to the Red Cross in Krakow, which sent him to Israel. A few months later, Joe reunited with his mother.

Lidia Furmanski passed away in December 2012.