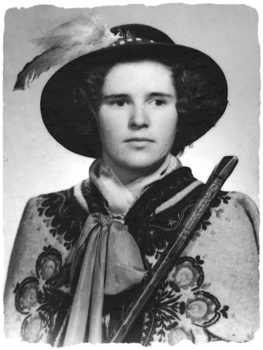 Warsaw, Poland… August 1943 – An acquaintance of Marianna’s parents brought two Jews to their home. They were asked to hide these strangers, Leon Weinstein and his sister-in-law, Bronislawa Szafran. Marianna’s parents took them in and told ten-year-old Marianna that she should tell her friends, if asked, that Leon and Bronislawa were her uncle and aunt.

Marianna stood guard lest a neighbor stop by for a surprise visit. A hiding place was built for Leon and Bronislawa in the coal cellar. One day the Germans raided the Gajowniczek home. Leon and Bronislawa went into their hiding place, and the rest of the family fled through the garden.
Several months later, Leon went out to get food and was caught in a general round-up.

Marianna’s mother sent her out to look for him. Marianna found him, ran up to him crying, and yelled to him to come home because, “Mother is waiting with dinner.” Leon took Marianna in his arms, and they managed to leave. When they reached the house, Leon burst into tears, kissed Marianna, and said, “You saved my life. I will never forget it.”

Marianna Gajowniczek passed away in 2018.