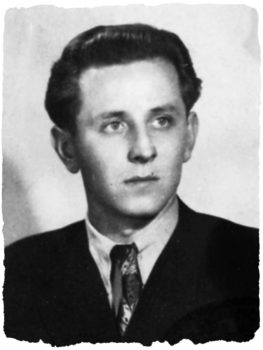 Czermna, Poland… 1941 – When the Germans invaded Czermna in September 1939, the lives of the seven Jewish families who lived in the village changed forever. In 1941 they were deported to the Krakow ghetto and then to the Plaszow camp. While escape seemed impossible, Sarah Elfenbein and her two young children managed to flee.

Sarah and the children returned to Czermna at night and hid in the barn of Stanislaw Owca. The next morning they were discovered by the Owca family, who agreed to hide Sarah and her children, Hanna and Meir, despite the risk of hiding Jews. When it became too dangerous for the family to remain with the Owca family, another neighbor, Andrzej Garbulinski, agreed to hide Sarah and her children. Andrzej and his son, Marian, built a hiding place for them in the barn.

Each day Marian brought food to the Elfenbeins. He watched out for curious neighbors and his school friends who would often visit. Hanna, being the youngest and smallest, often hid in a closet in the house.

On April 4, 1944, the Gestapo came to the farm and began searching for Jews. Neighbors had denounced the family. Andrzej tried to warn Sarah and her children but it was too late – they were all killed. The Germans ordered Andrzej, his sons, and his neighbor, Stanislaw, to dig a grave and bury Sarah, Hanna, and Meir.

Andrzej and Stanislaw were sentenced to death. Marian and his brother were sent to prison. Marian was the only one to survive the war. In 1947 a relative of the Elfenbein family came to the Garbulinski farm to thank them for hiding the family and to move the bodies of Sarah, Hanna, and Meir to the Jewish cemetery in Biecz.

Marian Garbulinski passed away in 2020.