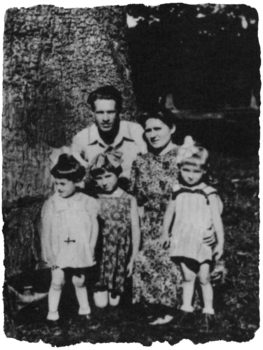 Adomas and Bronislava Geceviciene with their three daughters

Kovno, Lithuania… 1942 – The Germans had entered Kovno in 1941.  By 1942, the situation for Jews had become desperate.  Bronislava Geceviciene was passing a Jewish slave labor group from the ghetto, when suddenly a Jewish man ran up to her and begged her to save the life of his child.  Bronislava, a Catholic, and her husband, Adomas, agreed to take the child.

The next night they arrived at the fence of the ghetto and walked around trying not to attract attention. A portion of the fence was lifted and a sleeping baby was pushed through with a note – her name, Tikvah.  The couple hid the child in their home. Fearing betrayal by their neighbors, Bronislava took Tikvah to her aunt in the country and passed off the child as the twin sister of her youngest daughter. Tikvah, who had now become Teklita, stayed with the aunt on her country estate, which became the headquarters to the German high command in Lithuania. In a few months, Teklita returned to live with Bronislava and Adomas, who had moved to a new neighborhood.

After the war, Tikvah was reunited with her aunt, one of the few members of her family to survive.