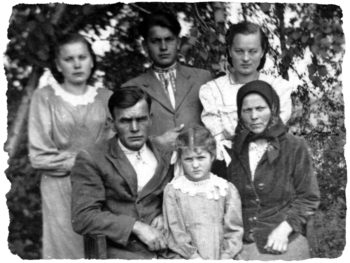 Shubkov, Ukraine… 1942 – The Germans launched their attack on the Soviet Union in June 1941 and began to murder the Jews.  Isaak Khomut went to Lubov and Pavel Gerasimchik and asked them to hide his family which consisted of his wife Polina, and daughter Luba. Mr. Khomut had known Lubov and Pavel from before the war, yet they were not close friends.

Lubov and Pavel had three children of their own – Klava, Galina, and Nikolay – plus a niece, Zina, whom they had recently adopted.  Even though they were very poor, they agreed to hide the Khomut family.  Pavel dug a hole in their cellar and the Khomut family lived in this hole from September 1942 until they were liberated on February 15, 1944.

Life changed for the Gerasimchik family.  They no longer invited their friends or neighbors to visit them, it was too dangerous.  Food was scarce and everyone was hungry.  The little food that Lubov managed to obtain, she shared with Isaak and his family.  For 18 months they lived in constant fear.  They all survived the war. Upon liberation, Mr. Khomut and his family made their way to the United States.