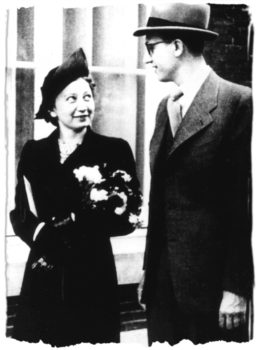 Miep and Henk Gies on their wedding day

In 1941, Otto Frank began making plans for his family to go into hiding, should the need occur. He built a secret annex adjacent to his factory and asked Miep if she would help. She said yes without hesitation. In July 1942 when his oldest daughter, Margot, received an order to report for deportation, the family immediately went into hiding. A total of eight Jews hid in the annex.
Every day Miep and three others who had also agreed to help had to find food for the eight Jews in hiding. This was a difficult and dangerous job, as food was very scarce and one could not buy any food without ration coupons issued by the Germans.

On August 4, 1944, Miep was working quietly at her desk when a man in plain clothes burst through the office door and pointed a gun at her. “Don’t move. Don’t make a noise,” he said. That day, after more than two years in hiding, the Franks, the van Pels and a dentist, Fritz Pfeffer, were betrayed for a bounty of 60 guilders, about $32 today. They were arrested and deported to concentration camps. Later that day, Miep climbed to the empty hiding space. Lying on the floor were Anne’s diary and papers. Miep told herself that she would keep them for when Anne returned.

When friends of the Franks found out about the arrest, they gave Miep money and told her to see whether she could bribe the German officials to have them released. Miep tried, but her brave bid failed. She kept the diary and waited for Anne to return. Miep never read the diary.
Otto Frank was the only one of the eight to survive. When he came back from Auschwitz at the end of the war, he lived with the Gies family. Miep did not give Anne’s diary to him. She knew it was not his. Although they knew that Mrs. Frank had died in Auschwitz, they still hoped that the children might return. Finally Otto Frank received a letter from a nurse who had been with Anne and Margot when they died, just one month before Bergen-Belsen was liberated. It was then that Miep gave Anne’s diary to Otto Frank.