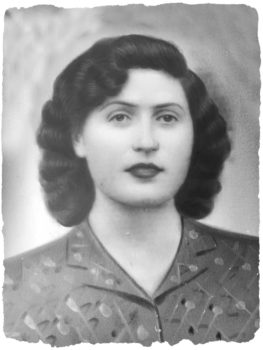 Veria, Greece… 1942 – Mentes Mordechai, his wife Miriam, known as Marie, and five children, Sara, Asher, Shmuel, Rachel, and Yossi lived in Veria, Greece.  Mentes owned a business and his wife had a dress shop and gave sewing lessons.  Germany occupied Greece on April 6, 1941.  With the arrival of the Germans, the persecution of the Jews began.

Evlambia Axiopoulos had worked in the Mordechai home.  When Yossi was born in August 1942, Marie did not have milk. Evlambia, who had given birth to a baby girl around the same time, became a wet nurse for Yossi.  Evlambia came regularly to the Mordechai home to feed Yossi.

Evlambia’s brother, Nikos, went to Thessaloniki to obtain false identity cards for the Mordechai family, only to find that the Jews of Thessaloniki were being deported.  Nikos warned the Mordechai family that the next transport of Jews was due in a few days and the train was scheduled to stop in Veria to collect the Jews of Veria.  Nikos, who was a carpenter, built a false ceiling in the attic of the old abandoned Turkish mosque where he was living with his family.  Marie and the children moved into the mosque before Passover 1943 and remained hidden there for more than a year.  Mentes hid with a friend from the army.

The Jews of Veria were rounded up on May 1, 1943.  The living conditions in the mosque were unbearable.  The place that Nikos built was very small, with no holes for air or sunlight.  The Mordechai family developed health problems and a new hiding place needed to be found, one that provided access to fresh air.

Efthimia Gianopoulou stepped forward to help the family.  Before the war, Efthimia studied to be a seamstress with Marie.  Since Efthimia was very poor and an orphan, Marie did not charge her for the lessons.  When a new hiding place was needed, Efthimia arranged for the entire Mordechai family to move into her two-room apartment which she shared with her sisters, Melpomeni and Bithleem.

The sisters shared everything with the family, most importantly food.  Shmuel, who was six years old, became very ill and died.  Shortly after Shmuel died, they were denounced to the Germans.  Relatives of the sisters helped the family to escape.  They took Sara, the eldest daughter, to the woods.  Marie took the two youngest, Rachel and Yossi, to hide in the mountains. Asher escaped to the mountains on his own.  After several days of being separated, the family escaped to the mountains where they were all reunited.  They hid in a pigsty where they remained until the area was liberated in December 1944.

While they survived the war, more than seventy-five members from the Mordechai family were murdered in Auschwitz.

Melpomeni, the last surviving member of her family, passed away in September 2022 at the age of 95 in Thessaloniki.

The JFR reunited Melpomeni and the Mordechai family in 2019 at Yad Vashem in Jerusalem.  Here is a link to the JFR’s award-winning documentary, Village of Angels, featuring Melpomeni.