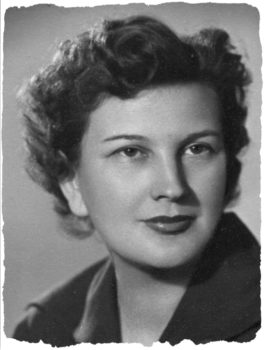 Budapest, Hungary… March 1944 – Magdalena Horvath was married to Erny Szendrody, a Jewish man, who came from a large family. In addition to his widowed mother, there were six brothers, some of whom were married, and many aunts, uncles and cousins. When her mother-in-law received her notice to report for deportation, Magdalena asked her own mother for her papers. Her mother, afraid of the consequences for helping a Jew, refused. Feeling she had no other choice, Magdalena took her mother’s papers and gave them to her mother-in-law. Magdalena then took her mother-in-law to an apartment in the mountains where she lived as a gentile until the end of the war.

When her youngest brother-in-law was taken for deportation to Auschwitz, Magdalena rushed to the station and managed to get him off the train. She took him to her apartment where two of his brothers and a baby were already in hiding.

In the last months of the war, when the situation became extremely dangerous, there were 28 Jews hiding in Magdalena’s small apartment.

Magdalena and Erny came to the United States in 1956 after the Hungarian revolution. Her husband died years ago.

Magdalena Horvath passed away in August 2004.