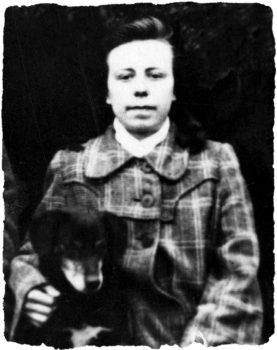 Skovagaliu, Lithuania… November 1943 – Lea Port and Samuel Ingel were members of a resistance group in the Kovno ghetto. The group received orders to escape from the ghetto on October 26, 1943, the day of an Aktion. Samuel and Lea survived the Aktion. Samuel escaped from the ghetto on October 27th and Lea on the 28th after saying goodbye to her parents and seven brothers and sisters.

After ten days of wandering, Lea and Samuel realized they were the only ones who had escaped from the ghetto successfully. The weather had turned cold; snow had fallen. Lea and Samuel had left the ghetto as members of a work brigade, taking nothing with them so as not to arouse suspicion. In ten days they had walked more than 100 kilometers and were tired and hungry. Near the village of Simnas, they met Semonas Tamulinas, a communist who had been hiding from the Germans for three years. He said his sister had a good heart and would take Lea into her home. Lea did not look Jewish and was able to pass as a Christian. Samuel, who looked Jewish, would have to hide in the woods.

Lea was brought to the home of Elena and Petras Ivanauskai. Elena, who was deaf and mute, lived on a small farm with her husband and their two children, thirteen-year-old Giedrute and nine-year-old Gintautas. They welcomed Lea into their home. At first Elena did not know Lea was Jewish; she thought Lea was the wife of a Russian officer. When Elena learned that Lea was Jewish, she decided not to tell her husband. Giedrute taught Lea sign language so she could communicate with Elena.

The family shared their small home and their meager food with Lea, who became close to Elena and the children. When the weather became bitterly cold, Lea asked Elena if Samuel could hide in their barn. Elena decided that she would help Samuel, too, but did not tell her husband. Samuel hid in the barn and Giedrute and Gintautas brought him food when they fed the cow. When Petras found out about Samuel and that Lea was Jewish, he did not want to risk the lives of his family for two Jewish strangers. Elena said, “What would have happened if our children were in such a desperate situation and what are they guilty of?” He agreed to let Lea and Samuel remain on the farm.

In 2006 the JFR reunited Lea Port with Giedrute Ivanauskai. The JFR produced a documentary retelling their story, which can be viewed here.