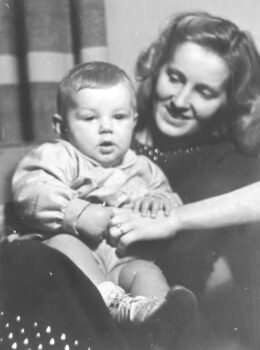 Inger Peschcke-Koedt and her son

Charlottenlund and Hellebæk, Denmark… April 1940 – Shortly after Germany invaded Denmark on April 9, 1940, Inger, Bobs, and Bibber Peschcke-Koedt joined the Danish resistance. The Peschcke-Koedt family lived outside of Copenhagen and had a summer home on the coast across from Sweden. Bobs and Inger were married with two small children. Inger was pregnant with her third child when the war began. Bobs’ younger brother, Bibber, who was 19 at the start of the war, was in the Danish army.

Bobs was a leader of a “cell” in the Resistance, which included Inger, Bibber, other family members and trusted friends. The Germans planned their Aktion for Rosh Hashanah 1943, the Jewish New Year. The Danish resistance was secretly informed that the Germans were planning to roundup and deport the Danish Jews on October 1st. The Danes responded by organizing a nationwide effort to smuggle their Jews across the water to neutral Sweden.

Until boats could be found to take Jews to Sweden, everyone had to stay in hiding. One of these hiding places was in the home of Inger and Bobs. During the next several weeks, a stream of “visitors” came and went. A family would stay for a night or two, hiding in the basement. Inger cooked meals for the Jews.

When a boat became available, Bobs would take the frightened Jews at night to the coast, carefully avoiding German patrols. Inger and Bobs always had a lot of friends visiting. So it was not unusual to see people coming and going, and the Germans knew that. While, this made it easier to bring Jews into their home, it was still very dangerous. After most of the Danish Jews had escaped to Sweden, the Peschcke-Koedt family continued to hide Jews until they could get to safety in Sweden.

The Germans had bugged their phone, so they spoke in code. One time, shortly after some “visitors” had been put on a boat to Sweden, the Germans showed up at dinnertime. They had heard Bobs on the phone saying that someone could stay over. Inger explained that they had a friend over for dinner who was staying in a basement room that night. Fortunately the friend was blonde, so it was easy to convince the Germans that they were not hiding Jews. The Germans searched anyway, but found nothing.

For one trip, they obtained a larger fishing and cargo boat, which sailed from Denmark to Germany with food supplies. Hidden under the fish in the cargo hold were a group of Danish Jews. The thought was that the Germans would not closely inspect a boat going to or leaving Germany, even though the next stop was Sweden. They made it safely to Sweden.

Although Inger was afraid for her young daughters, she knew it was the right thing. Her response was, “What else could we do?” Denmark was liberated on May 4, 1945. The war was over, and the Danish Jews returned home. Inger and Bobs got to see the Jews they helped.

In the early 1950s, Bobs and Inger and their family, and later Bibber and his wife, immigrated to the United States. When Inger heard that there were people going around saying the Holocaust never happened, it made her very angry: “When you think of how many people have suffered, and the terrible conditions the people who went to concentration camps returned in, their lives ruined…and then to say ‘it never happened.’ How dare they?” Inger began going to schools to talk to the children. “I think it’s important that they know that saving the Danish Jews was a spontaneous decision made by the Danes collectively… The Danes felt that it shouldn’t happen to our Danes, to other human beings… I personally think it could happen in any country, like it did in Germany. When I was younger I was naive enough to think that the Holocaust couldn’t happen again. But now I think it could. And that’s why we have to prevent it. We have to keep the memories alive.”