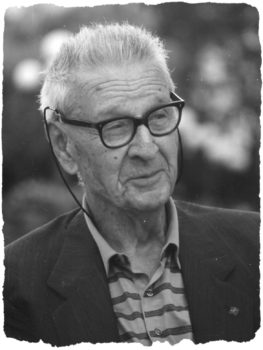 Budapest, Hungary… November 1944 – Giorgio Perlasca worked for an Italian importing firm in Budapest, Hungary. When Mussolini fell in July 1943, all Italians in Hungary were requested to return home. Perlasca refused to go to a German-ruled Italian puppet state. As Perlasca said: “I was neither a fascist nor an anti-fascist, but I was anti-Nazi.” Perlasca was interned; however, on October 13, 1944, he was able to talk his way out of the hotel where he was being held.

He made his way to Angel Sanz-Briz, the Spanish envoy in Budapest, and applied for a job. Sanz-Briz, along with other members of the diplomatic community, had been issuing protective passes to Budapest Jews since the spring of 1944. Sanz-Briz put Perlasca in charge of the “safe houses” sheltering Jews from deportation and from the Arrow Cross militia.

On November 30, 1944, Perlasca learned that Sanz-Briz had gone, leaving him a note saying that he could obtain a visa to Switzerland through the Spanish embassy in Vienna. Although Perlasca did not have an official letter appointing him the charge d’affaires of Spain, he made himself the charge d’affaires and continued to issue protective passes. He changed his first name from the Italian “Giorgio” to the Spanish “Jorge.” Perlasca later said, “At first, I didn’t know what to do, but then I began to feel like a fish in water. I continued giving out protective passes and looked after the Jews in the ‘safe houses’ flying the Spanish flag. As the proverb says, Opportunity makes the thief.”

Between November 1944 and January 1945, Perlasca worked with Raoul Wallenberg from Sweden; Friedrich Born, from the International Red Cross; and Angelo Rotta, from the Vatican; in issuing protective passes. It is estimated that Giorgio Perlasca saved approximately 3,500 Hungarian Jews. On April 5, 1945, Dr. Hugo Dukesz, one of the Jews saved by Giorgio Perlasca, wrote, “On this occasion we want to express the affection and gratitude of the several thousand Jews who survived, thanks to your protection. There are not enough words to praise the tenderness with which you fed us and with which you cared for the old and the sick among us. You encouraged us when we were close to despair, and your name will never be omitted from our prayers. May the Almighty grant you your reward.”

Giorgio Perlasca returned to Padua, Italy after the war.  He died in August 1992.