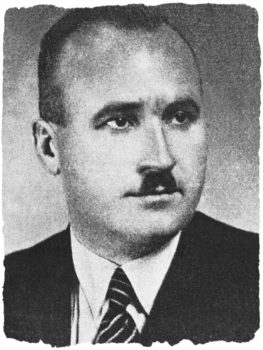 Sofia, Bulgaria… March 1943 – In January 1941, Bulgaria passed anti-Jewish legislation modeled after the Nuremberg laws that Germany had instituted in 1935.  The Bulgarian government felt that an alliance with the Germans would enable the country to regain land it had lost decades earlier.  Persecuting the nearly 50,000 Jews was a way to show common cause.  Some Bulgarian politicians, writers, intellectuals, and church leaders protested the measures, but the government stood firm.  Germany realized that it had a loyal partner in Bulgaria and welcomed the country into the Axis alliance in March 1941.

Dimitar Peshev, the deputy speaker of the Bulgarian parliament, supported the anti-Jewish legislation.  He felt that Bulgaria’s alliance with Germany was in his country’s best interests and that the anti-Jewish measures were a shrewd move.  The strategy proved a success.  In April 1941, Bulgaria participated in the invasions of Greece and Yugoslavia and received portions of each country in return.  Another 11,000 Jews came under Bulgarian rule, more than 7,000 in Thrace (annexed from Greece), and some 4,000 in Macedonia (annexed from Yugoslavia).  Over the next two years, the Bulgarian government confiscated Jewish property, forced Jews to wear yellow stars, and further limited their rights.  The government, however, took no immediate steps to deport the Jews to killing centers.

The situation changed dramatically in February 1943.  Bulgaria agreed to Germany’s request to hand over 20,000 Jews from its territories.  In March, Bulgarian authorities arrested more than 11,000 Jews living in the newly annexed territories, and German army units deported them to the Treblinka killing center in Poland.  Because the Bulgarian government had not met the quota of 20,000, it decided to deport Jews of Bulgarian citizenship, namely the 8,000 living in the town of Kyustendil near the Macedonian border.  Word of the plan spread and angered many of the non-Jewish residents.  A delegation of Bulgarians boarded a train for Sofia, the capital, to protest the deportation.  They were hoping to enlist the support of Dimitar Peshev, the deputy speaker of the Bulgarian parliament.

Although he had supported Bulgaria’s anti-Jewish laws, Dimitar had done so because he knew it would strengthen his country’s alliance with Germany. He never supported the deportation of Bulgaria’s Jews.  He, too, wanted to stop it.  On March 9, 1943, he brought the Kyustendil delegation, along with several parliament members, to meet with the Minister of the Interior, Petur Gabrovski.  Gabrovski denied knowing about the plan, but they knew he was lying and demanded that he cancel the deportation.  After a lengthy argument, Gabrovski agreed to do so.  Dimitar knew, however, that the Jews were not out of danger.

On March 17, 1943, Dimitar wrote a letter to Prime Minister Bogdan Filov in which he opposed any future deportations of Bulgarian Jews.  He convinced 42 of his colleagues in parliament to sign the petition and presented it to the prime minister. Filov was furious that Dimitar organized such a public protest.  The parliament voted to remove Dimitar from his position as deputy speaker.  Soon thereafter, Alexander Belev, the Bulgarian official in charge of the government’s Jewish policy, launched a plan to deport all of the nearly 50,000 Bulgarian Jews to Poland.

Although Dimitar felt defeated, his actions caused others to intensify their protests.  Leaders of the Bulgarian church sent letters to the prime minister and to King Boris III. Prominent writers and intellectuals spoke out, as did groups of lawyers, physicians, and communists.  This collective pressure led King Boris III to alter his policy.  Despite competing pressure from the Germans, he prevented the deportations by having many Bulgarian Jews assigned to forced labor units in Bulgaria.  As a result, no Jews of Bulgarian citizenship were sent to their deaths in Poland.

Dimitar Peshev passed away in 1973.