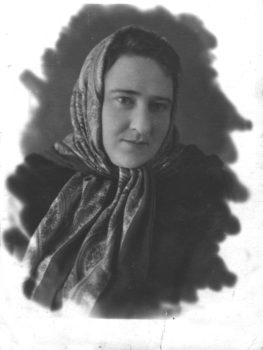 Kiev, Ukraine… September 1941 – Five-year-old Mariya Gura was living with her Ukrainian father, Aleksey, and Jewish mother, Genya, when Germany occupied Kiev on September 19, 1941. On September 29, Aleksey and Mariya escorted Genya to the place where Jews were ordered to assemble. When the family reached Babi Yar, a large ravine on the edge of the city, Genya handed Mariya to Aleksey and disappeared into the crowd. Aleksey and Mariya returned home to later find out that the Jews of Kiev were being murdered in Babi Yar.

Anelya Petrovich and Aleksandra Vlasenko, neighbors in their apartment building, came to comfort Aleksey and help take care of Mariya. It soon became clear that children of mixed marriages were in imminent danger as well. Anelya and Aleksandra hid Mariya in the building’s attic and took care of all of her needs, making an effort to bring her special foods. Anelya brought the young girl toys, dolls, and a kitten to keep her company. Mariya was taught to sit in silence for hours, to listen for unusual noises, and to hide if anyone came to the attic door.

Anelya and Aleksandra hid Mariya in the attic for four months.  At the end of January 1942, Aleksey took his daughter and moved to a rural area. After Kiev was liberated on November 6, 1943, Aleksey and Mariya returned to their apartment. They were reunited with their friends, Anelya and Aleksandra.

Anelya and Aleksandra died years ago.