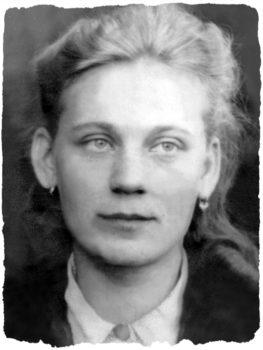 Jody, Poland… January 1943 – When Germany attacked the Soviet Union on June 22, 1941, the Soviet army retreated and the German army rapidly advanced eastward. One of the towns they occupied was Jody, then in Poland (now Belarus). Jody was a small shtetl with 1,000 inhabitants, about 700 of whom were Jewish. The Germans immediately herded the Jews of Jody as well as Jews from surrounding villages into a ghetto. On December 17, 1941, the fifth night of Hanukkah, the Germans and their Polish collaborators massacred roughly 500 of those Jews. By the end of the month, they had captured and murdered another 100. Of the roughly 100 Jews who were still alive, some fled to ghettos in nearby towns, some wandered from place to place, and a few were hidden by Christians. The Silverman and Smuszkowicz families were among those who found shelter.

Alter Silverman and his three teenage children, and his sister Chaiye Rivke Smuszkowicz and her three teenage children escaped the liquidation of the ghetto by hiding with their non-Jewish neighbors. The eight relatives spent most of 1942 hidden by two Christian families – five hid with one, three with the other. Toward the end of that year, the Germans raided the farm where one group was hiding. Although the Jews were not discovered, they had to find a new place to stay.

The Silvermans and Smuszkowiczes found shelter with the Konochowicz family, who were complete strangers. The family consisted of the parents and eight children, including 17-year-old Jadviga, the third oldest. The two Jewish families asked if they could stay for one night. They ended up staying for more than a year. Although the Konochowiczes were poor and barely able to care for their own family of ten, they provided food and shelter for the eight Jews. In doing so, they sacrificed their own welfare and risked their lives. The punishment for hiding a Jew in German-occupied Poland was death.

To avoid detection, the eight Jews lived in the attic of the Konochowicz’s barn. Jadviga regularly brought them food, which they pulled up to the attic in pails attached to a rope.

In June 1943, four of the Silverman and Smuszkowicz children left the farm and went into the forest to join the Spartak partisan brigade. A few months later, the other two teenagers joined another partisan brigade that was fighting the Germans. They continued to use the Konochowicz farm as a safe house. Jadviga continued to help by smuggling weapons and ammunition to the partisans. All eight members of the Silverman and Smuszkowicz families survived the war.

Jadviga Konochowicz passed away in May 2012.  The JFR also supports Jadviga’s sister, Anna.  Her other sister and brother, who were supported by the JFR died several years ago.

In 2003 the JFR reunited Jadviga Konochowicz with Jack and Peter Silverman and their cousins Peter, Dave, and Jane Smuszkowicz. Jack Silverman and Peter Smuszkowicz had not seen Jadviga since 1945. To watch their reunion documentary, please click here.